The Reasons Behind the Need for Professional Asian Translations

Why Is It So Important To Consider Setting Out in Asian Market and Have Expert Asian Translations?

There is no comparison between Asia and other continents when we talk about the advancing economic growth. We can affirm that many of Asia’s countries have already outpaced Western countries. According to the International Monetary Fund estimates, Asia ranks first in terms of overall GDP in 2021.

Away from statistics, acceleration and stability can be your answer to the above question. Accelerated economic growth with which you can level up your business and establish your presence in Asia is one of the reasons why you should consider reaching Asia’s advancing market. Plus, there’s that economic stability factor that you can depend on when thinking about the unknown.

We can sum up the reasons to the following:

Hence, introducing a service or a product to such a large audience ensures the reach of more ideal customers who have a deep interest in your services. That’s why nowadays Asia catches the attention of ambitious businesses among different industries.

Given the importance of the Asian market power, many investors decided to enter this only enormous population market. To give you an idea, one of the most valuable brands in Asia that left a footprint in Asia’s business market is Alibaba. Bear in mind that Alibaba is a local brand that has, later on, become a global brand; its success was dependent on the local market of Asia.

To prove this point, check the following examples:

1- According to the U.S. Department of State, Singapore eases the whole business registration process on foreign investors. You can enter Singapore’s market in one day with SGD 1, together with the low taxes offering. That’s why many investors prefer to kick-start their business expansion in Singapore.

2- According to the U.S. Department of State, foreign investors have access to low taxation in Malaysia. In 2019, for instance, the Malaysian Investment Development Authority proclaimed that companies eligible for the Government’s Principal Hub incentive could pay 10% taxes instead of 24%.

3- Thailand is growing in importance, in comparison with other Asian countries, in terms of economic growth after it has applied the concept of free trade. According to the U.S. Department of State, Thailand’s Board of Investment positioned itself through issuing new incentives in 2019.

Imagine entering a new market and knowing in advance with absolute certainty that you’re going to boom! It’s not a gambling business, but it’s a guaranteed one! 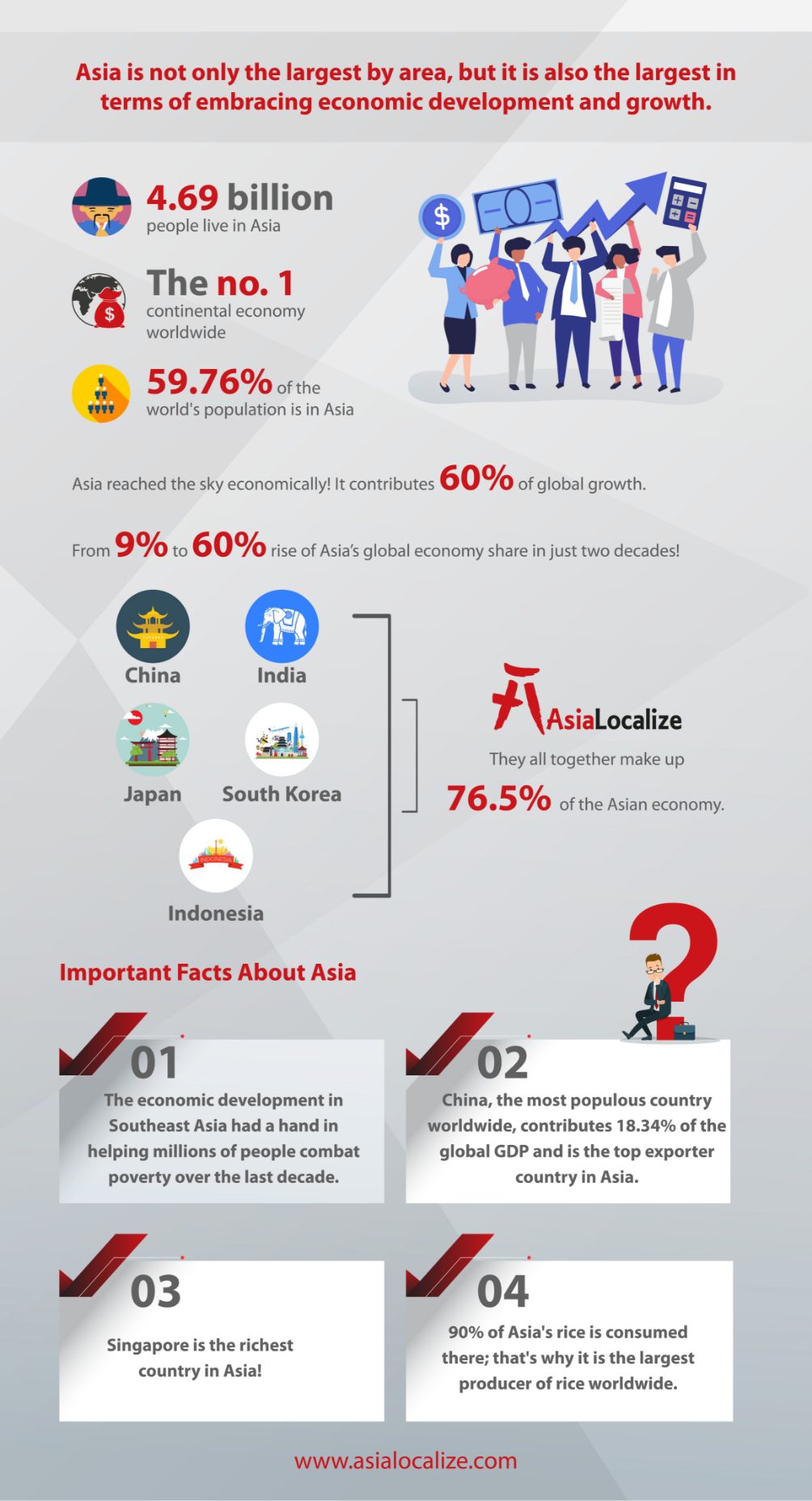 Wondering where to start with expert Asian translations? Let’s have a look first at the most popular languages in Asia!

The Most Popular Spoken Languages in Asia

As the world’s largest continent, Asia is massive and has the second-highest number of countries. Naturally, it is characterized by a great diversity of languages, cultures, and history. This wide geographical range can be categorized into 6 main regions (or subregions):

How, sometimes, strikingly different these regions are, in terms of ethnic and cultural identities, religious beliefs, history, and perspectives of life, is both beautiful and mind-boggling that one continent brings these people together.

And speaking of venturing into the Asian world and connecting with these people, it’d be wrong to think that one or two languages are enough to speak the whole continent. That’s why professional Asian translations and services come into play!

But first, here are the most spoken languages across Asia:

Countries: Bangladesh and some regions of India
Language Family: Indo-Aryan Language – which is related to Punjabi and Hindustani.

Countries: Republic of China, Taiwan, and Singapore
Language Family: Sino-Tibetan Language – making it a close relative of Tibetan, Burmese, and other languages that are spoken mainly in Southeast Asia and the Himalayas.

P.S: The Chinese language is the most spoken worldwide. Still, if you meet two Chinese speakers who originated from different regions, they might not understand each other at all. Well, that’s because the Chinese language includes various dialects, most importantly, the Mandarin Chinese dialect.

Countries: The Philippines
Language Family: Austronesian Language – which are related to Malay and Javanese.

Countries: Indonesia and East Timor United Nations
Language Family: Austronesian Language – which is related to Javanese and Filipino or Tagalog.

Countries: South Korea, North Korea, and an area in China along the border of North Korea
Language Family: It’s not related to any other language.

Countries: Russia, Kazakhstan, and Kyrgyzstan
Language Family: Indo-European Language – which is related to French, Spanish, Hindustani, Bengali, Persian, Punjabi, and many other languages.

Countries: Turkey and Cyprus
Language Family: Turkic Language – which is related to Turkmen and Azerbaijani.

Do you know that the most spoken language in Asia is Mandarin Chinese?

Here are the most spoken languages in Asia 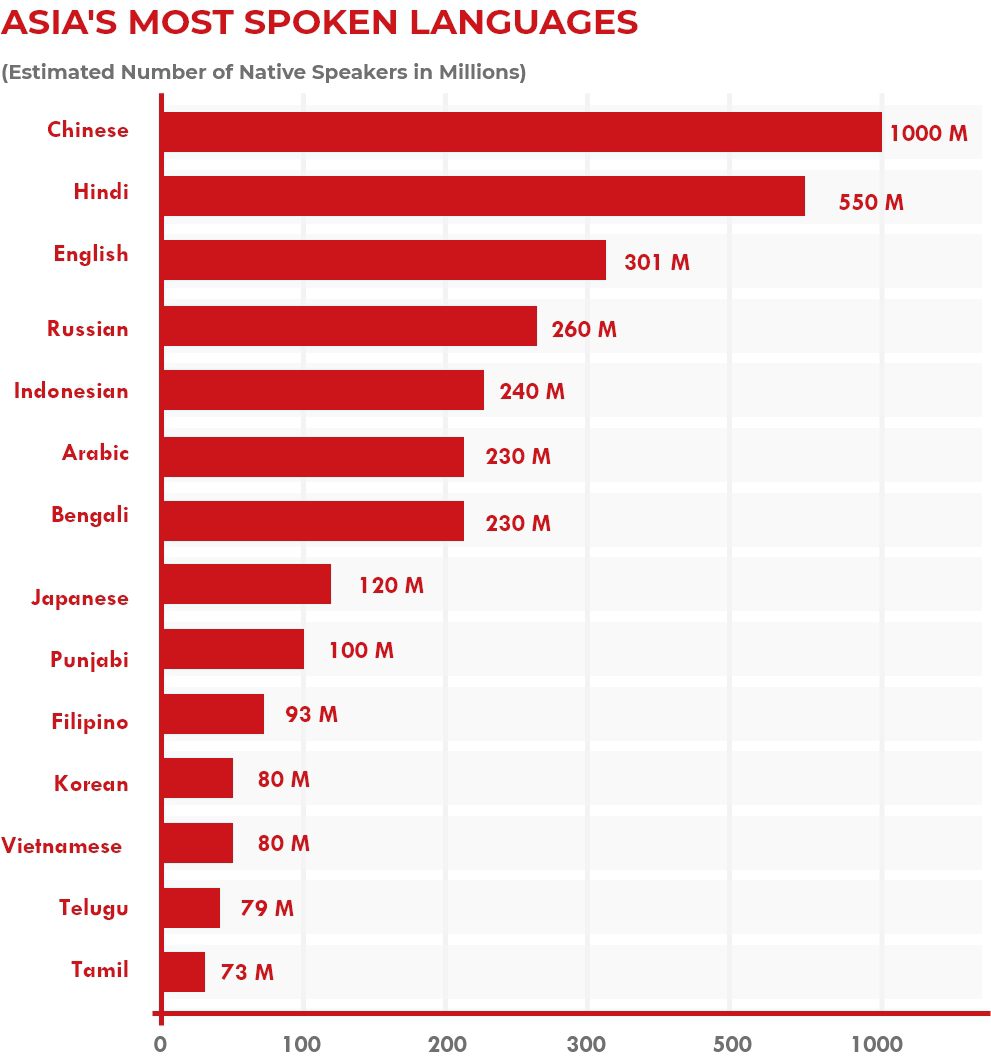 Why Is It So Vital To Get on Board With Professional Asian Translations?

Language is our way to communicate with each other effectively. Though 1.348 billion people speak English, according to Statista, it is worth noting that native speakers are less than 400 million. In all honesty, even though you can comprehend the English language, your mother tongue is and will always be the closest to your heart and mind. So, business-wise, you can’t depend on English solely. If you want to have a decisive influence on Asians, you should pave the way for expert Asian translations leading you to a strong connection and relative understanding.

Here are the benefits of incorporating professional Asian translations into your business strategy:

1. Reach a Large Pool Of Asian Prospects: One of the pros of achieving market expansion is reaching your potential customers. It goes without saying that expert translations will assist you heartily to grab your audience’s attention and form an unbreakable bond between your business and them by bridging the language barriers and focusing on cultural appropriateness.

3. Cut Corners: Time is money, and we know that it is one of your most important business resources as well. So, it’s vital to assign the translation task to a professional services provider that has the tools and operational efficiency, unlike a freelancer, to get the job done on time, at the lowest expenses, and without compromising on quality.

4. Guarantee a Thorough Translation Process: From translating to editing and proofreading, professional translation providers will provide you with end-to-end solutions that cover all your needs. Plus, project managers will be in your service minute by minute to achieve your satisfaction.

What If Professional Translations Aren’t Part of Your Business Expansion Strategy in Asia. How Challenging Can It Be?

Read more in this short guide

Do you want to increase your business revenue? Do you want to stand out amongst your competitors? If yes, it is essential to become familiar with the importance of a region like Asia. Now is the best time to take the Asia expansion approach into your strategy and act upon it. Moreover, consider having a global Asian translation company by your side to help you reach your Asian audience at a fast pace through high-quality Asian translations. Whether you need Chinese translation services or Japanese and Korean localization services, play the right way by investing in an experienced Asian translations provider that will arm you with professional translations services to enter whatever market you desire.

Do You Want to Know More About Asialocalize’s

Talk to Our Experts