10 Translation Techniques To Give You a Sense of the Scope

“How does any text get translated?

In this article, we’ll explore the many types of translation methods, including the direct and indirect translation techniques, to help you understand what’s going on behind the scenes. Whether you have an in-house translation/localization team or employ a professional language provider or even a translator, this post allows you to sneak a peek at the different translation techniques. 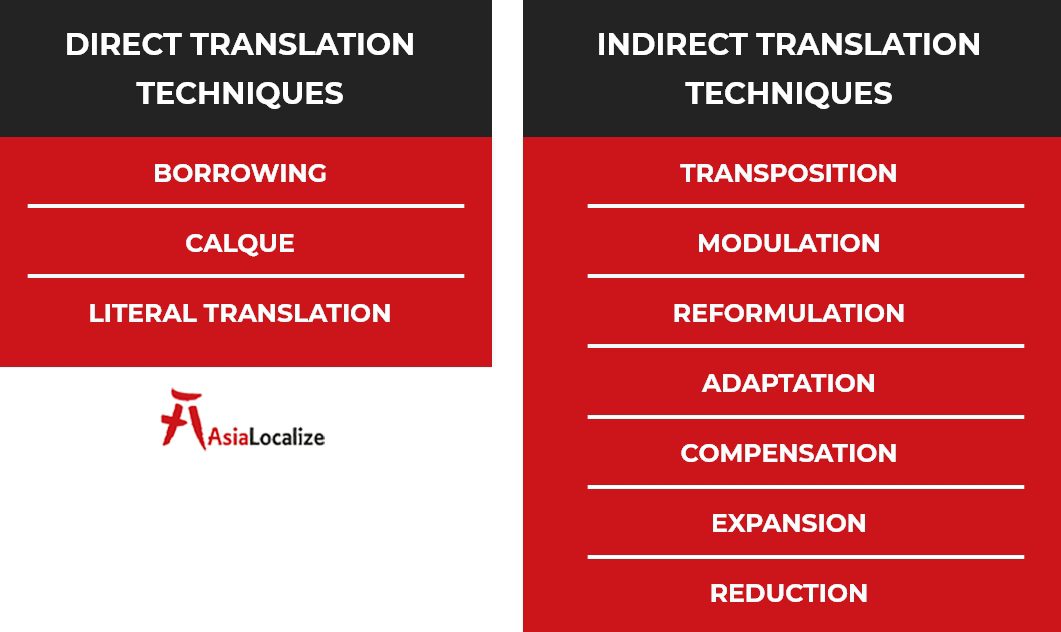 Translators use these techniques when it’s possible to utilize the structural and conceptual elements of the source language in the target language.

Borrowing is a technique that doesn’t seem to be a “translation” since it uses words or expressions from the source language. As its name suggests, it borrows the word from the original text and inserts it into the target language without any alteration.

Usually, the translator uses this technique when:

For example, the English Language borrowed many expressions and words from other languages, such as German (Kindergarten and Hamburger), French (Café and résumé), and Japanese (Kimono).

P.S.: Usually, the translator writes the borrowed term in italics if it’s considered foreign and not common in the target locale.

It’s worth noting that Calques can spread widely in the target locale if they are absorbed and accepted by natives like “breakfast” that comes from the French term “déjeuner.” However, Calques can likely fail in the target language if the translator doesn’t utilize them cautiously.

This method is all about translating word-for-word from the source language. Usually, the translator uses this strategy when the languages they are translating from and to are close, especially culturally-wise. To illustrate, the French question “Quelle heure est-il?” is translated to “What time is it?” in English. In this  example, you can see that the literal translation approach doesn’t affect the meaning that the original phrase aimed for!

The translator should be careful when using this technique since it can sometimes fail; it has specific rules. The translated text should retain the word order, style, and meaning of the source language while being at the same time idiomatic.


Translators use these techniques when the source and target languages’ cultural and linguistic aspects are not close. Therefore, direct translation methods can’t carry the original text meaning faithfully to the target language.

Oblique translation techniques transform the structural and conceptual elements so it doesn’t miss the nuances of the original text.

Due to the contrasts in grammatical structures between different languages, the transposition technique comes into play. It’s when the translator changes parts of the text order (sentence structure) while retaining the same meaning as the original text, such as the English sentence “He likes dancing” that turns to be “Er tanzt gern” in German.

Transposition is particularly the favorite technique for English and Spanish translators since both languages are dramatically different grammatically. English verbs are likely to come at the beginning of the sentence, while the Spanish verb comes at the end.

Modulation is all about adjusting the point of view of the source language. Without changing the purpose of the text, the translator uses another phrase in the target text to convey the same meaning as the original text. It involves semantic and perspective change while preserving the intent of the source language’s text. The translated text should give a sense of nativeness, such as the French phrase “dernier étage” -which means literally “last stage”- that turns to be “top floor” in English.

Do you want to translate an idiom, advertising slogan, or proverb? Then, reformulation is your way to go. This method allows the translator to find an equivalent to the original expression in the target language. He changes the phrase totally while expressing the same meaning as the source language. For example, the English idiom “let the cat out of the bag” is translated to “vendre la mèche” in French.

Also known as cultural equivalence or cultural substitution, Adaptation is the chosen method when translating jokes, as an example. It’s essential when expressing the meaning of phrases that don’t exist among the target audience culturally or aren’t common in the target culture. The translator replaces the original phrase with another culturally acceptable and convenient one to the target locale.
Accordingly, when readers dip into the translated text, they can feel as if it’s not translated, as if it has been created especially for them. “Culture-friendly” is the whole idea behind this technique; it’s how to fit in with another language’s culture.

As its name suggests, this method compensates for missing the nuances of the original text by mentioning the lost info later in the translated text. The translator uses this technique when a word has more than one meaning or form in the source language while having just one in the target language.

So, to ensure that the reader doesn’t miss any detail, the translator should be creative enough to insert the missing info smartly into the translated text without sounding awkward. To give an illustration, German has two ways for expressing “you”: Du (formal) and Sie (informal.) So, in order to translate this form of formality into English, the translator has to pick other expressive words to be added to the text.

A Comparison Between Translation
Techniques (With Examples)


Have your own copy of AsiaLocalize’s
comparison sheet!

Sometimes, the translator chooses to cut words or phrases that seem redundant or unnecessary while translating from one language to another; this method is called reduction. During the application of this method, the translator should be super conscious and careful so as to sail through any difficulties during the mission of conveying the intended original message safely without losing anything in translation. For example, the English term “computer science” is reduced to be “informática” in Portuguese.

Contrary to reduction, the expansion technique involves adding more words to express the source text meaning the best. Sometimes, without amplification or expansion, the meaning can’t be conveyed since there might be differences structurally, grammatically, and semantically between the source and target languages. However, professional translators shouldn’t use it gratuitously; they should know the best time. For example, the English word “Penalty” should be translated to “tir de réparation” in French.

As we can see above, even though there are many translation techniques that seem to require too much thinking to choose from while translating, expert translators don’t actually spend too much time thinking about the best-suited method during the process. It depends on the translator’s experience that has been built over years, reflected in his intuitive choice and use of translation methods. It’s a process that takes place and runs automatically without the intervention of any intricacies.

The ability to choose the appropriate translation method at the right time during the translation process is what makes the difference between a skilled, expert translator and a novice. So, if you’re searching for a professional language provider who has in-depth acquaintance with the best practices of translation techniques and methods, at AsiaLocalize, we hire the top linguists. We can guarantee the quality and outcome of translation services produced depending on fast and valid actions taken by our world-class translators.

Your translation quality is subject to the choice
of a competent language provider!


Get the quality you deserve with AsiaLocalize!

Get A Free Quote Now !

Address: Kuala Lumpur Office: Level 33, Ilham Tower, No. 8, Jalan Binjai, 50450 Kuala Lumpur
Phone: Tel : +603-2169-6313
Email: Info@asialocalize.com
We use cookies to ensure that we give you the best experience on our website. If you continue to use this site we will assume that you are happy with it.OkPrivacy policy